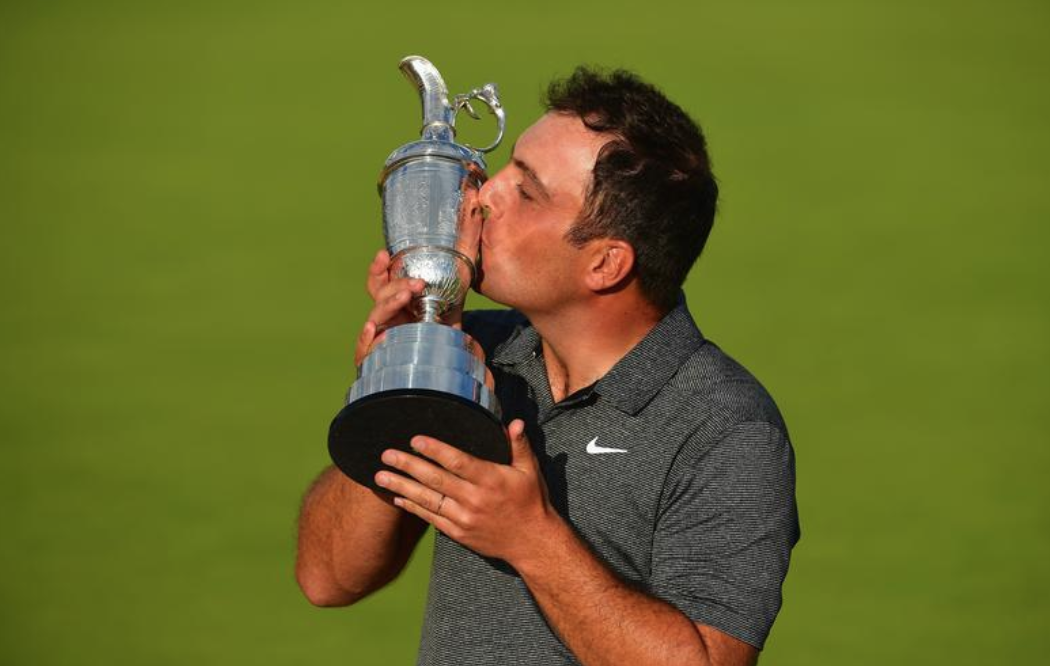 The Open, golf’s oldest major (and often referred to as the British Open in the US),  concluded yesterday after four amazing rounds. Sunday’s leaderboard saw some of the biggest names in golf, including that of Tiger Woods who was certainly in the hunt moving into the final day. While he came up three short of the winner, fans saw a glimpse of his greatness, particularly when Woods’ tallied a 66 on Saturday, Tiger’s best best Open round since 2006. Jordan Spieth sought to be the first since Padraig Harrington in 2008 to win back-to-back Claret Jugs. And while he managed to squeeze in a trim at a local barber shop, he too didn’t quite cut it in the end, finishing four shots out of first. So if neither Spieth nor Woods (nor Rory – who tied for 2nd) came out on top, who did? With a score of -8, Francesco Molinari took home his first major title and Italy’s first major championship. In the running from day one, he remained calm, cool and collected throughout, something difficult to do with 1.42 million pounds (roughly 1.86 million US dollars) on the line. This win, when combined with his other three victories over the last two months, moves Molinari to the No. 6 position in rankings, his highest ever.

Bryce Harper won the Home Run derby on his home field, in front of thousands of Nationals’ fans. The American League defeated the National League squad in extra innings, thanks to back-to-back homers from Astros’ teammates Alex Bregman and George Springer. But All-Star week became far more about one individual player- and his off the field antics- than anything that happened during the scheduled events. Josh Hader, a relief pitcher for the Milwaukee Bucks, started his night by giving up multiple hits while at the mound on Tuesday. It ended with someone digging up his twitter history, revealing a slew of racist and homophobic comments. Posted back in 2011-2012, Hader claims those messages in no way reflect the person he is today and broke down in tears while apologizing to his teammates. Rules state that players cannot be officially punished for comments made prior to joining the MLB but there’s a possibility Josh will be asked to attend sensitivity training in the coming weeks. When entering Saturday’s game, his first appearance since the All-Star game and social media reveal, Hader received a standing ovation from the home crowd, showing that while many don’t or might not ever forgive him, his fans already have.

Liz Cambage, an Australian playing for the WNBA’s Dallas Wings had the performance of a lifetime earlier this week, scoring 53 points and shooting 17-22 from the field. This feat, while impressive enough in her league, also hasn’t been achieved in the NBA since 1996. The last player to tally 50 points, 10 rebounds and a 75% shooting percentage was the great Michael Jordan. The twittersphere went crazy, showering Cambage, also the first female to dunk in an Olympic game, with deserved praise. With this in mind, it’s a wonder that players in the WNBA make substantially less than their male counterparts. While the NBA brings in more revenue, and many argue that should lead to higher wages, when looked at based on percentages, female professional basketball players are given only 22.8% of the league’s income whereas the men get 50%. The end result is an average salary of just over $70,000 and a maximum allowance of $115,500. Compare that to the NBA’s average of around $6.2 million.  Based on math alone, there’s a strong argument for increasing salaries across the WNBA.

Featured Female- Katelyn Tuohy (Track and Field): One of the two Gatorade High School Athletes of the Year, Katelyn becomes the first in the history of this award to be named the top athlete in two sports nationally- Track and Field and Cross Country. Katelyn holds the national record in the mile, the 3,200 meter and the 5,000 meter.

DeMar DeRozan (Basketball): The man traded from the Raptors to the Spurs in exchange for Kawhi Leonard.  Averaging 23 points per game, DeRozan has spent his entire career in Toronto and helped his team make the playoffs four years in a row. It would appear while he is certainly displeased by the negotiations, so too is Leonard who previously stated he had “no desire” to play for the Canadian team .

Antonio Brown (Football): The Steelers’ wide receiver will be the face of Madden 19, one of the most famous sports-related video games in the world. Pittsburgh fans now hold their breath hoping the Madden Curse, the tendency for every player put on the cover to struggle the following season,  does not hold true for Antonio.

Michael Johnson (Race Car Driving): Paralyzed from the waist down at the age of 12 in a motorcycle accident, Johnson co-drove to win the IMSA Continental Tire SportsCar Challenge race. Using hand controls to steer, he completed all but the final lap, which he handed off to his teammate Stephen Simpson.

Jermaine Gresham (Football): The Arizona Cardinals’ tight end has made quite a name for himself, in the best way possible. Over the years, he has earned a reputation for his random acts of kindness, on display most recently when he paid a baggage fee for a law student. She posted her conundrum and solution on twitter which led to others sharing when/how Gresham also helped them. From buying new clothes and dinner for a homeless man to covering a grocery bill, Jermaine truly pays it forward.

Jon Gruden (Football): The longtime Tampa Bay coach turned ESPN broadcaster returned last January to the city that started it all: Oakland. Over the weekend, Gruden threw a massive party for the Raider Nation, providing music, food, drinks and autographs to fans of all ages. If they weren’t already excited to have Jon back in the saddle, as the team’s head coach, the city of Oakland sure is now!

The infield consists of four bases: home plate, first, second and third. While it might seem like players move to and from bases willy-nilly there are, in fact, clear rules when it comes to running the bases.

Boston Red Sox v. Baltimore Orioles (Baseball): Despite such a drastic difference in records (Boston sits 42 games ahead of Baltimore), a handful of altercations during the 2017 season has created some bad blood between these two teams. For example, one Orioles player publicly suggested the Sox were using the flu to excuse poor play and another injured Boston’s second baseman while sliding. Tune in starting on Monday, July 23rd to see if the Red Sox are still holding a grudge.

Chicago Cubs v. St. Louis Cardinals (Baseball): When these two teams faced off in the 2015 NLDS, and Chicago sent the 100 win Cardinals packing, a rivalry was born. The tension only continued to grow when Jason Heyward moved from St. Louis to Chicago, insulting his “aging” former team in the process. Since then, the Cardinals have made some moves in order to close the growing gap between the two teams and so, despite the Cubs sitting 8 games ahead of the Cardinals, it’s bound to be a fun matchup. The first game is scheduled for Saturday, July 27th.